Using Senspods, it is now easier than ever to check indoor environmental quality.
The new Senspods were developed and trialed through a grant from the Eco Energies Innov funding program Eco Innov focusing on home energy savings.
Studies at Coventry University clearly showed that monitoring CO2, temperature, humidity and amount of light is also useful for home energy profiling and to better understand where gains can be made towards passive homes.( Coventry Passive Homes ).
The data can be visualized in real time using mobile phones or data sent to the cloud can be to compare the environmental quality of different homes. END_OF_DOCUMENT_TOKEN_TO_BE_REPLACED

To answer the request from developers wanting to integrate Senspod data into their own applications, we are releasing our first version of the Sens2Cloud API. The principles that guided us were ease of use, flexibility to adapt to new types of sensors, and flexible controls.
Dominique Guinard (with Ion and Mayer) highlighted the advantages of using REST for wireless sensor networks in this publication:

Now that the framework is released, the next Senspods will all follow the same data format, but since we’ve got already 15 Senspods, you have a busy summer ahead of you.
In this manual, you will find how to deal with:
Authentication
Query format
Returned values

Quantified Self is a worldwide community of self-trackers, interested in everything that could provide personal data.
QS Paris organizes a meetup in Paris on May, 22th where Sensaris will present ECOsense as a personal air quality monitor. The idea is to explain how anyone could use an ECOsense to monitor the environment, how it may be possible to integrate data provided by the sensors to crowdsourcing platforms.

API, collaborative projects, mobile applications, citizen actions are all key words to explain what could be done in collaboration with such a community.

If you’re interested in QS community of if you want to attend the presentation, everything is available here:

Picarro (http://www.picarro.com) produces highly sensitive and accurate gas sensing instruments which rely on a technology called cavity ring down spectroscopy. The company published a fascinating methodology to determine actual CO2 emissions from a city.This was performed during the Davos summit.You can see the results of such visualisation here:
CO2 emissions over Davos

Actual methodology is detailed in this publication from Picarro:
CityCarbon_Science_and_Data

This graph compares the emissions for cities of various scales and built around different economies: Davos, Seoul and Tokyo.

Even though sensors used for participatory sensing such as Senspods are not laboratory instruments, once properly calibrated and used by citizens to cover city wide areas, there is no reason why mobile sensors could not be used to quickly build a global environmental network. 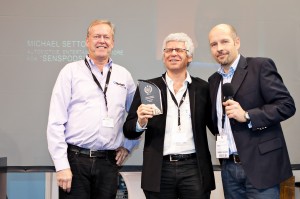 Yesterday was a very special day as we received in Munich an award for the Bluetooth Worldwide Innovation Cup in the category “Automotive, entertainment and other” .
This has a special meaning for us as it validates our vision to build a global network of environmental monitoring sensors for citizens. Mobile phones are personal devices but our environment is a shared responsibility and concern. The Senspod family is growing quickly and there will be exciting announcements in the near future so stay tuned.

We thank the Bluetooth SIG and the members of the jury for this recognition, and for those of you that could not attend the ceremony at ISPO, here is our presentation. 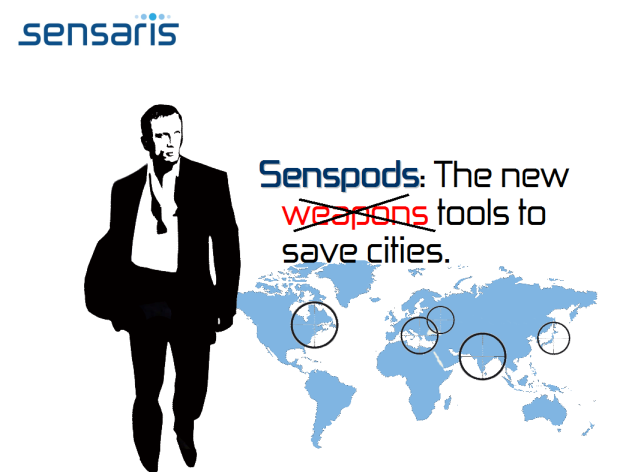 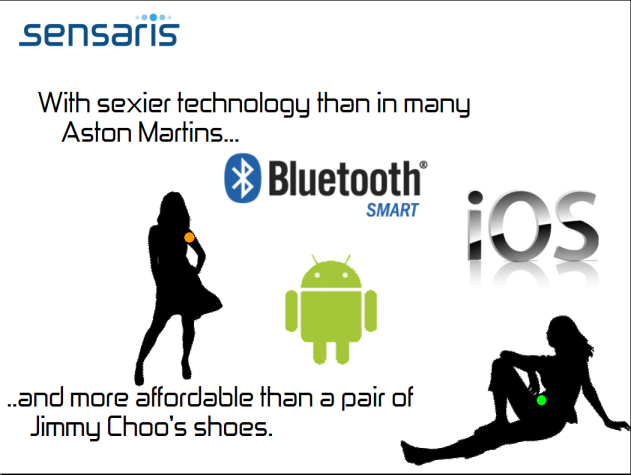 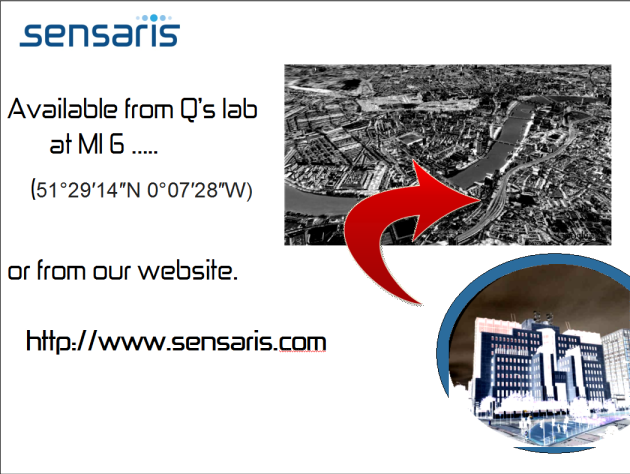 After beta tests in 6 countries (out of 18 countries where Senspods are used), we are now releasing Senspod App.
Starting with EcoSense, you can now download software directly from the Android Market, install it on your Android devices and start making a difference for the environment in your city.
Simple steps:

Send your friends the web address to see your data live. You are done.

Current record is 1:48 (and that was even without any warm-up whatsoever).Can you top that ?? 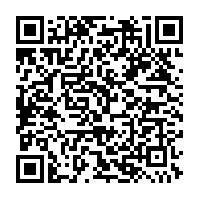 The Qatar University Wireless Innovations Centre (QUWIC) at the Qatar Science and Technology Park has unveiled two new systems that they say will deal with some of the significant logistics and systems management issues currently facing Qatari institutions.
Using its new Labeeb data processing system, QUWIC has launched Masarak, a comprehensive solution to provide real-time and historic traffic information in Qatar, and a user interface that will support services and applications using this information to address the needs of three market segments: government entities, enterprises, and consumers.
Users can access these systems through mobile device applications, web applications, voice, SMS and broadcast, and will allow users to monitor traffic congestion on an interactive map, as well as get directions between locations that factor in traffic flow, ease of use and distance. The system can monitor data from vehicles such as Mowasalat taxis and buses, and will also integrate data from cameras. QUWIC officials say that the system promises to assist with traffic congestion and monitoring, vehicle tracking, trip planning, dispatching and intelligent fleet management.

Users will be able to monitor air quality in real time on their mobile device According to QUWIC officials, strategic partnerships have been formed to create comprehensive business ‘eco-system’, including the Ministry of Municipality and Urban Planning, the Ministry of Interior and Traffic Department, Mowasalat, Qtel, Qatar University, and Qatar Foundation.
QUWIC has also partnered with Qatar Foundation’s HSSE Department, the Qatar Energy and Environment Research Institute and the Ministry of Environment to design and build its Qatar Air Pollution Surveillance System (QAPSS).
The system will use the Labeeb data processing technology to integrate data from air monitoring sensors that are set to be installed along Qatar’s roads with data from larger air quality monitoring stations at Qatar University, Education City, the Ministry of Environment and other locations around Doha.
QUWIC officials said that additional sensors can be installed at construction sites, smart cities, sports facilities and educational institutions as needed.
These stations will be monitoring levels of particulate matter, oxygen, carbon monoxide, carbon dioxide, nitrogen oxide, and sulphur oxide, as well as other atmospheric conditions such as temperature and humidity, all of which have an effect on human health.
QAPSS will help build a bank of historical and real time environmental data that will provide a clear map of air quality conditions around Doha, which will allow experts to advise on possible safety measures and government policies.
Users will also be able to monitor air quality conditions in real time on their mobile device through an application designed by QUWIC’s Mobile App Development Centre. QUWIC officials said that these systems were purpose built, and will continue to evolve to meet new challenges and tackle new problems as they come up. They are in a position to be flexible and adaptive, as these solutions have been built in-house and have not been brought in from institutions outside of Qatar.

We have been working on this topic for several years and thought it would be beneficial to gather and share in one location technical information pertaining to wireless sensors for urban environmental monitoring.

Here is a map of the projects/studies we are aware of, and we will constantly update it of course. If you are aware of other projects that we should add to this list, please send us information.

The urban bicycle boom in Europe seems to be a steady trend, and there seems to be more benefits than just fitness and global warming. In Toulouse, France, Oramip (http://www.oramip.org) in charge of measuring air quality in the Midi-Pyrennees region, conducted in 2008 and 2009 a very interesting study comparing the exposure to NOx, CO and fine particles for different modes of transportation.

The main results are reproduced below:

This is quite interesting as it shows that bicycling not only helps you stay stay fit, but also it is better for your lungs !

The results are consistent with work done in 2009 by Woodrow Pattinson at the University of Canterbury in New Zealand Cyclist exposure to traffic pollution: microscale variance, the impact of route choice and comparisons to other modal choices in two New Zealand cities which concludes:

“Final comparative exposure results largely agreed with those of international studies. The cyclist (on-road) fared relatively well against other modes. Carbon monoxide exposure for the car was around 2.6 and 2.3 times higher than both the cyclist and bus, in Christchurch and Auckland, respectively. Train exposure was lower still - by a factor of 4.3, compared to car. The cyclist was also the least exposed for ultrafine particles – by a factor of 1.6, compared to car and bus concentrations which were roughly the same.

There was not a lot of variation between modes for mean PM1.0-10 exposure. PM10 was highest for the cyclist in Auckland, but only 4% greater than bus, whereas this difference was 23% in Christchurch, in favour of the cyclist. The bus mode also had the highest mean exposure for PM2.5 and PM1.0 in Auckland, while the cyclist was slightly lower than car. The bus was also highest in Christchurch, followed by the cyclist and then the car. The higher levels in the bus are likely due to diesel self-pollution and intake of outside air through open windows and the continual opening of doors.»
The level of PM10 found for Auckand (See below) is pretty close to that measured in Toulouse:

From these studies in two different hemispheres, one can clearly state that from every point of view, mayors of smart cities are right to encourage bicycling for their citizens…..To be continued.

If you are interested in various aspects of air quality monitoring, there is a new book online edited by Nicolás A. Mazzeo.

Human beings need to breathe oxygen diluted in certain quantity of inert gas for living. In the atmosphere, there is a gas mixture of, mainly, oxygen and nitrogen, in appropriate proportions. However, the air also contains other gases, vapours and aerosols that humans incorporate when breathing and whose composition and concentration vary spatially. Some of these are physiologically inert. Air pollution has become a problem of major concern in the last few decades as it has caused negative effects on human health, nature and properties. This book presents the results of research studies carried out by international researchers in seventeen chapters which can be grouped into two main sections: a) air quality monitoring and b) air quality assessment and management, and serves as a source of material for all those involved in the field, whether as a student, scientific researcher, industrialist, consultant, or government agency with responsibility in this area.